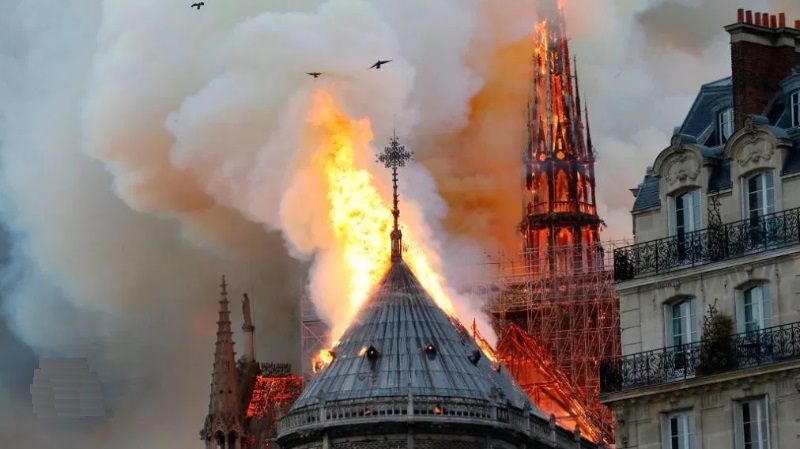 We will bring you more info and update this story, but as of now, there is a significant fire that has broken out at the Notre Dame Cathedral in Paris.

The most religiously and architecturally significant cathedral on earth.

According to Paris City Hall, the fire started shortly before 7pm Paris time.

11 to 13 million visitors visit Notre Dame each year. During holy week, it’s absolutely sad that this takes place at this time.

It’s currently undergoing some kind of renovations as you can see from the scaffolding and it’s not known yet whether or not this has played a part in the fire starting. It appears the fire started in the center near the spire where the scaffolding is. Most of the roof is already destroyed in just 30 to 45 minutes.

Firefighters are currently in the building, but it appears to be completely engulfed in flames. So hard to watch for us here at https://notredamecathedralparis.com after we have covered this famous monument for 10 years. With such an old building, it makes sense that it would be this flammable.

The spire has just collapsed through the center. People appear to have been evacuated. But no news on this. Firefighters did enter to fight. It was a busy time just before closing.

The rooftop has been closed for the past year and many of the donors have come from the United States. The inside is crumbling wood and gargoyles have been known to have fallen off the roof as of late.

Update: 8:01pm Paris time. It is completely engulfed in flames. This famous piece of French Architecture is really super damaged. People nearby claim rain showers of ash are coming down. Yesterday with Palm Sunday and this whole week, heavy visitors are scheduled. We’re praying everyone got out. Water trucks appear to be shooting water to try and keep it from the front, but 20 and 30 foot flames are shooting from the top.

The home church of the archdiocese of Paris, Notre Dame has more visitors than even the Eiffel Tower each year.

52 acres of timber was used on the inside. Inside wooden beams actually nicknamed the forest because of so much wood. Nothing left of Notre Dame roof and it makes sense that it would be incredibly flammable. Construction took place in the 12th century.

Update: 8:25 Paris time – the whole roof has now collapsed in flames. Mayor of Paris on the scene and President Macron apparently on the way. Paris currently at a standstill watching several miles of smoke plumes.

8:56pm Paris: It seems to have significantly lessened. But still red hot in center. The Church was undergoing a 6 million Euro renovation project.

Thankfully, our prayers have at least been partially answered. The Facade and towers were not destroyed. The roof and cathedral will be rebuilt.

French President Emmanuel Macron, speaking from the scene, described the fire as a “terrible tragedy,” but added the “worst had been avoided.” He noted that the cathedral’s facade and two main towers did not collapse during the fire.

Macron just announced that, starting Tuesday, he will launch an international fundraising campaign to rebuild the Notre Dame Cathedral.

“I’m telling you all tonight — we will rebuild this cathedral together. This is probably part of the French destiny. And we will do it in the next years. Starting tomorrow, a national donation scheme will be started that will extend beyond our borders,” Macron said. “Paris without Notre Dame? Madness”.